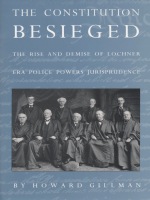 The Constitution Besieged offers a compelling reinterpretation of one of the most notorious periods in American constitutional history. In the decades following the Civil War, federal and state judges struck down as unconstitutional a great deal of innovative social and economic legislation. Scholars have traditionally viewed this as the work of a conservative judiciary more interested in promoting laissez-faire economics than in interpreting the Constitution. Gillman challenges this scholarly orthodoxy by showing how these judges were in fact observing a long-standing constitutional prohibition against "class legislation." Originally published in cloth by Duke University Press, this book received the 1994 C. Herman Pritchett Award for the "Best Book in the Field of Law and Courts," awarded by the Law and Courts Section of the American Political Science Association.
AUTHOR BIOGRAPHY

Howard Gillman is Associate Professor of Political Science at the University of Southern California.