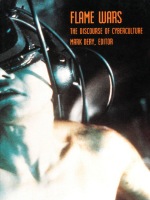 "Flame Wars," the verbal firefights that take place between disembodied combatants on electronic bulletin boards, remind us that our interaction with the world is increasingly mediated by computers. Bit by digital bit we are being "Borged," as devotees of Star Trek: The Next Generation would have it—transformed into cyborgian hybrids of technology and biology through our ever more frequent interaction with machines, or with one another through technological interfaces.
The subcultural practices of the "incurably informed," to borrow the cyberpunk novelist Pat Cadigan’s coinage, offer a precognitive glimpse of mainstream culture in the near future, when many of us will be part-time residents in virtual communities. Yet, as the essays in this expanded edition of a special issue of the South Atlantic Quarterly confirm, there is more to fringe computer culture than cyberspace. Within these pages, readers will encounter flame warriors; new age mutant ninja hackers; technopagans for whom the computer is an occult engine; and William Gibson’s "Agrippa," a short story on software that can only be read once because it gobbles itself up as soon as the last page is reached. Here, too, is Lady El, an African American cleaning woman reincarnated as an all-powerful cyborg; devotees of on-line swinging, or "compu-sex"; the teleoperated weaponry and amok robots of the mechanical performance art group, Survival Research Laboratories; an interview with Samuel Delany, and more.
Rallying around Fredric Jameson’s call for a cognitive cartography that "seeks to endow the individual subject with some new heightened sense of place in the global system," the contributors to Flame Wars have sketched a corner of that map, an outline for a wiring diagram of a terminally wired world.

Mark Dery is a cultural critic whose writings on technology and fringe culture have appeared in the New York Times, Rolling Stone, Wired, and Mondo 2000.

Techgnosis, Magic, Memory, and the Angels of Information / Erik Davis

A Rape in Cyberspace; or, How an Evil Clown, a Haitian Trickster Spirit, Two Wizards, and a Cast of Dozens Turned a Database into a Society / Julian Dibbell