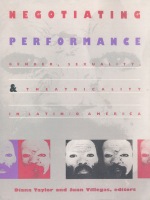 In Negotiating Performance, major scholars and practitioners of the theatrical arts consider the diversity of Latin American and U. S. Latino performance: indigenous theater, performance art, living installations, carnival, public demonstrations, and gender acts such as transvestism. By redefining performance to include such events as Mayan and AIDS theater, the Mothers of the Plaza de Mayo, and Argentinean drag culture, this energetic volume discusses the dynamics of Latino/a identity politics and the sometimes discordant intersection of gender, sexuality, and nationalisms.
The Latin/o America examined here stretches from Patagonia to New York City, bridging the political and geographical divides between U.S. Latinos and Latin Americans. Moving from Nuyorican casitas in the South Bronx, to subversive street performances in Buenos Aires, to border art from San Diego/Tijuana, this volume negotiates the borders that bring Americans together and keep them apart, while at the same time debating the use of the contested term "Latino/a." In the emerging dialogue, contributors reenvision an inclusive "América," a Latin/o America that does not pit nationality against ethnicity—in other words, a shared space, and a home to all Latin/o Americans.
Negotiating Performance opens up the field of Latin/o American theater and performance criticism by looking at performance work by Mayans, women, gays, lesbians, and other marginalized groups. In so doing, this volume will interest a wide audience of students and scholars in feminist and gender studies, theater and performance studies, and Latin American and Latino cultural studies.

Diana Taylor is Associate Professor of Spanish and Comparative Literature at Dartmouth College. She is the author of Theater in Crisis: Drama and Politics in Latin America.

Juan Villegas is Chair of the Department of Spanish and Portuguese at the University of California, Irvine. He is the director of Gestos as well as the author of numerous novels and scholarly works in Spanish.

REVIEWS
"Among its many virtues, Negotiating Performance has the merit of bravely tackling the thorny issue of Latino identity head-on. Taylor’s strong and thoughtful introduction sets the tone for a challenging reflection on the pitfalls of a multiculturalist stance (be it purely commercial or naively sympathetic) that blithely incorporates, homogenizes, and dispatches differences without ever dwelling on the more profound implications of those differences in U. S. culture today."—Sylvia Molloy, New York University


"The attractiveness of Negotiating Performance lies exactly in the boldness of including a diverse group of essays, each of which speaks with its own voice. It will provide valuable insights into areas of contemporary interest in theatre studies."—George Woodyard, University of Kansas

The Multicultural Paradigm: An Open Letter to the National Arts Community / Guillermo Gomez-Pena

Looking for the Magic: Chicanos in the Mainstream / Jorge Huerta

Staging AIDS: What's Latinos Got To Do With It? / Alberto Sandoval

Seduced and Abandoned: Chicanas and Lesbians in Representation / Sue-Ellen Case