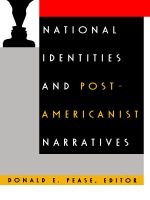 National narratives create imaginary relations within imagined communities called national peoples. But in the American narrative, alongside the nexus of belonging established for the national community, the national narrative has represented other peoples (women, blacks, "foreigners", the homeless) from whom the property of nationness has been removed altogether and upon whose differences from them the national people depended for the construction of their norms. Dismantling this opposition has become the task of post-national (Post-Americanist) narratives, bent on changing the assumptions that found the "national identity."
This volume, originally published as a special issue of bounrary 2, focuses on the process of assembling and dismantling the American national narrative(s), sketching its inception and demolition. The contributors examine various cultural, political, and historical sources--colonial literature, mass movements, epidemics of disease, mass spectacle, transnational corporations, super-weapons, popular magazines, literary texts--out of which this narrative was constructed, and propose different understandings of nationality and identity following in its wake.

Donald E. Pease is Avalon Professor of the Humanities and Professor of English at Dartmouth College. He is the author of Visionary Compacts: American Renaissance Writings in Cultural Context and editor of a number of books including National Identities and Post-Americanist Narratives and, with Amy Kaplan, Cultures of United States Imperialism, both published by Duke University Press.

The Politics of Nonidentity: A Genealogy / Ross Posnock 34

As I Lay Dying in the Machine Age / John T. Matthews 69

Failed Cultural Narratives: America in the Postwar Era and the Story of Democracy / Alan Nadel 95

On Becoming Oneself in Frank Lentricchia / Daniel O'Hara 230