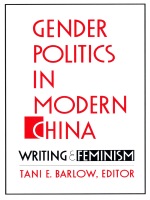 Through the lens of modern Chinese literature, Gender Politics in Modern China explores the relationship between gender and modernity, notions of the feminine and masculine, and shifting arguments for gender equality in China.
Ranging from interviews with contemporary writers, to historical accounts of gendered writing in Taiwan and semi-colonial China, to close feminist readings of individual authors, these essays confront the degree to which textual stategies construct notions of gender. Among the specific themes discussed are: how femininity is produced in texts by allocating women to domestic space; the extent to which textual production lies at the base of a changing, historically specific code of the feminine; the extent to which women in modern Chinese societies are products of literary canons; the ways in which the historical processes of gendering have operated in Chinese modernity vis à vis modernity in the West; the representation of feminists as avengers and as westernized women; and the meager recognition of feminism as a serious intellectual current and a large body of theory.
Originally published as a special issue of Modern Chinese Literature (Spring & Fall 1988), this expanded book represents some of the most compelling new work in post-Mao feminist scholarship and will appeal to all those concerned with understanding a revitalized feminism in the Chinese context.

REVIEWS
"Among Western critical approaches, feminist criticism offers the most exciting promise, both for raising the level of critical analysis of Chinese texts, and for testing Western theories as they are applied cross-culturally. Gender Politics in Modern China provides convincing evidence of what can be done."—Yi-tsi Mei Feuerwerker, University of Michigan


"Theoretically informed and sophisticated, the essays in this volume relflect some of the most creative and intelligent readings of twentieth-century Chinese fiction being produced in a number of venues. Taken as a group, they illustrate the variety of ways in which gender has been deployed by modern Chinese writers as textual and political strategy."—Gail Hershatter, University of California, Santa Cruz

The Language of Despair: Ideological Representations of the "New Woman" by May Fourth Writers / Ching-kiu Stephen Chan

Images of Subjugation and Defiance: Female Characters in the Early Dramas of Tian Han / Randy Kaplan

Writing with Your Body: Literature as a Wound--Remarks on the Poetry of Shu Ting / Wolfgang Kubin

Harmony and Equality: Notes on "Mimosa" and "Ark" / Chen Yu-shih

In the Translator's Eye: On the Significance of Zhu Lin / Richard King