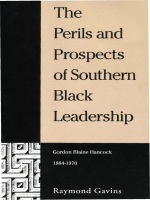 The Perils and Prospects of Southern Black Leadership fills an important gap in uncovering the history of southern black leaders between the death of Booker T. Washington and the rise of Martin Luther King, Jr. Originally published to critical acclaim in 1977 (Duke University Press), and now available in paperback with a new preface by the author, this book provides an intellectual biography of Gordon Blaine Hancock, a Virginia educator, journalist, and minister whose writings and speeches on race relations were widely influential in the South in the thirty years prior to the Brown decision of 1954. In showing how Hancock faced his generation's main dilemma—how to end Jim Crow and ensure integration without abandoning ideals of black identity, independence, and solidarity—Raymond Gavins's biography illuminates the history of African Americans and race relations in America.
REVIEWS
&quot;A social history of profound consequences informing us of those noble warriors who anticipated the Civil Rights and Black Power movements. Professor Gavins has written a work of major social and historical significance.&quot;&mdash;James E. Blackwell, University of Massachusetts at Boston


&quot;Gavins is the quintessential intellectual historian. . . . [His] biography has a currency rarely found in scholarly studies.&quot;&mdash;John Blassingame, Yale University