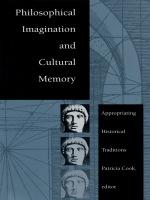 Does philosophy have a future? Postmodern thought, with its rejection of claims to absolute truth or moral objectivity, would seem to put the philosophical enterprise in jeopardy. In this volume some of today's most influential thinkers face the question of philosophy's future and find an answer in its past. Their efforts show how historical traditions are currently being appropriated by philosophy, how some of the most provocative questions confronted by philosophers are given their impetus and direction by cultural memory.
Unlike analytic philosophy, a discipline supposedly liberated from any manifestation of cultural memory, the movement represented by these essays demonstrates how the inquiries, narratives, traditions, and events of our cultural past can mediate some of the most interesting exercises of the present-day philosophical imagination. Attesting to the power of historical tradition to enhance and redirect the prospects of philosophy these essays exemplify a new mode of doing philosophy.
The product of a National Endowment for the Humanities Summer Institute in 1990, it is the task of this book to show that history can be reclaimed by philosophy and resurrected in postmodernity.

Part I. Philosophy and Cultural Memory

Part II. Philosophical Imagination and the History of Philosophy

Are Philosophical Problems Insoluble? The Relevance of System and History / Alasdair MacIntyre 65

Modern Moral Philosophy: From Beginning to End? / J. B. Schneewind 83

Part III. Perspectives on the Significance of Cultural Memory

Humanism and the Problem of Traditions in Seventeenth-Century Natural Philosophy / Lynn S. Joy 139

The Symbiotic Relation of Philosophy and Theology / Robert Cummings Neville 149