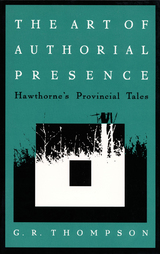 The Art of Authorial Presence: Hawthorne’s Provincial Tales
by G. R. Thompson
Duke University Press, 1993
Paper: 978-0-8223-1321-2
The critical literary world has spent a wealth of thought and words on the question of Hawthorne himself: Where does he stand in his works? In history? In literary tradition? In this major new study, G. R. Thompson recasts the "Hawthorne question" to show how authorial presence in the writer's works is as much a matter of art as the writing itself. The Hawthorne who emerges from this masterful analysis is not, as has been supposed, identical to the provincial narrator of his early tales; instead he is revealed to be the skillful manipulator of that narrative voice, an author at an ironic distance from the tales he tells.
By focusing on the provincial tales as they were originally conceived--as a narrative cycle--Thompson is able to recover intertextual references that reveal Hawthorne's preoccupation with framing strategies and variations on authorial presence. The author shows how Hawthorne deliberately constructs sentimental narratives, only to deconstruct them. Thompson's analysis provides a new aesthetic context for understanding the whole shape of Hawthorne's career as well as the narrative, ethical, and historical issues within individual works.
Revisionary in its view of one of America's greatest authors, The Art of Authorial Presence also offers invaluable insight into the problems of narratology and historiography, ethics and psychology, romanticism and idealism, and the cultural myths of America.
AUTHOR BIOGRAPHY

G. R. Thompson is Professor of English and Comparative Literature at Purdue University

REVIEWS
"There is no doubt that this is a new, revisionary approach to Hawthorne. It seeks to locate Hawthorne historically but in a way that will free his work from purely local or ideological considerations."—Edgar A. Dryden, University of Arizona


"Thompson presents us with a network of aesthetic terms whose newness consists of the new level of precision they allow us. Nor does the usefulness of such a new system of critical terms end with Hawthorne: their implications stretch beyond his fiction to that of his American contemporaries, male and female."—Cynthia S. Jordan, Indiana University