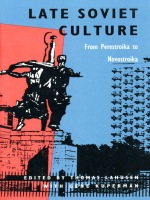 As the Soviet Union dissolved, so did the visions of past and future that informed Soviet culture. With Dystopia left behind and Utopia forsaken, where do the writers, artists, and critics who once inhabited them stand? In an "advancing present," answers editor Thomas Lahusen. Just what that present might be--in literature and film, criticism and theory, philosophy and psychoanalysis, and in the politics that somehow speaks to all of these—is the subject of this collection of essays.
Leading scholars from the former Soviet Union and the West gather here to consider the fate of the people and institutions that constituted Soviet culture. Whether the speculative glance goes back (to czarist Russia or Soviet Freudianism, to the history of aesthetics or the sociology of cinema in the 1930s) or forward (to the "market Stalinism" one writer predicts or the "open text of history" another advocates), a sense of immediacy, or history-in-the-making animates this volume. Will social and cultural institutions now develop organically, the authors ask, or is the society faced with the prospect of even more radical reforms? Does the present rupture mark the real moment of Russia's encounter with modernity? The options explored by literary historians, film scholars, novelists, and political scientists make this book a heady tour of cultural possibilities. An expanded version of a special issue of South Atlantic Quarterly (Spring 1991), with seven new essays, Late Soviet Culture will stimulate scholar and general reader alike.

Thomas Lahusen is Professor of Russian and Comparative Literature at Duke University. He is the coeditor of Socialist Realism without Shores, also published by Duke University.

Perestroika: The Restructuring of the Past or the Invention of the Future? / Mikhail Kuraev 13

Perestroika in Reverse Perspective: The Reforms of the 1860s / Sidney Monas 35

The Obstacle: The Human Being, or the Twentieth Century in the Mirror of Dystopia / Renata Galtseva and Irina Rodnyanskaya 69

The Tastes of Soviet Moviegoers during the 1930s / Maya Turovskaya 95

The Mystery of the River Adon: Reconstruction of a Story / Thomas Lahusen 139

The Eunuch of the Soul: Positions of Reading and the World of Platonov / Valery Podoroga 187

Domostroika or Perestroika? The Construction of Womanhood in Soviet Culture under Glasnost / Helena Goscilo 233

After the Future: On the New Consciousness in Literature / Mikhail Epstein 257

Beyond Moscow and St. Petersburg: Some Reflections on the August Revolution, Provincial Russia, and Novostroika 307