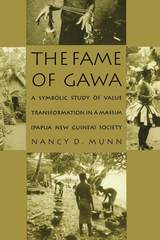 The Fame of Gawa: A Symbolic Study of Value Transformation in a Massim Society
by Nancy D. Munn
Duke University Press, 1992
Paper: 978-0-8223-1270-3
This new edition of the critically acclaimed The Fame of Gawa—originally published in 1986—makes available for the first time this important work in paperback. The Fame of Gawa is concerned with fundamental practices of value creation on Gawa, a small island off the southeast coast of mainland Papua New Guinea, the inhabitants of which participate in the long-distance kula shell exchange ring. Integrating various aspects of the study of society and culture--including the sociocultural construction of space and time, self-other relations and the body, and moral and political problems of hierarchy and equality—Nancy D. Munn shows that it is through achieving fame in the wider inter-island world that the Gawan community asserts its own internal viablity.
AUTHOR BIOGRAPHY

Nancy D. Munn is Professor of Anthropology at the University of Chicago.