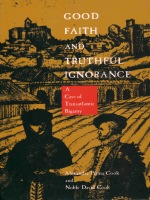 Good Faith and Truthful Ignorance uncovers from history the fascinating and strange story of Spanish explorer Francisco Noguerol de Ulloa. in 1556, accompanied by his second wife, Francisco returned to his home in Spain after a profitable twenty-year sojourn in the new world of Peru. However, unlike most other rich conquistadores who returned to the land of their birth, Francisco was not allowed to settle into a life of leisure. Instead, he was charged with bigamy and illegal shipment of silver, was arrested and imprisoned. Francisco’s first wife (thought long dead) had filed suit in Spain against her renegade husband.
So begins the labyrinthine legal tale and engrossing drama of an explorer and his two wives, skillfully reconstructed through the expert and original archival research of Alexandra Parma Cook and Noble David Cook. Drawing on the remarkable records from the trial, the narrative of Francisco’s adventures provides a window into daily life in sixteenth-century Spain, as well as the mentalité and experience of conquest and settlement of the New World. Told from the point of view of the conquerors, Francisco’s story reveals not only the lives of the middle class and minor nobility but also much about those at the lower rungs of the social order and relations between the sexes.
In the tradition of Carlo Ginzberg’s The Cheese and the Worms and Natalie Zemon Davis’ The Return of Martin Guerre, Good Faith and Truthful Ignorance illuminates an historical period—the world of sixteenth-century Spain and Peru—through the wonderful and unusual story of one man and his two wives.
AUTHOR BIOGRAPHY

Noble David Cooks is Professor of History at Florida International University. They are coeditors of The Discovery and Conquest of Peru, also published by Duke University Press.

III. Neither Rectitude nor Tranquility 14

IV. The Healthiest in Peru 18

V. This City is Traitorous 21

VIII. Kissed Her on the Cheek 32

XVI. Justice Will Not Be Lost 57

XVII. She Should Receive 62

XVIII. No Case Is So Expensive 64

XXI. In Search of the Fugitive 73

XXII. I Have Presented Myself 76

XXVII. No Hope of Survival 88

XXVIII. Give Me the City 90

XXXVI. Contrary to the Truth 112

XLV. Interred in My Chapel 138

XLVII. He Had Consummated 142

XLVIII. Has Not Fulfilled 145