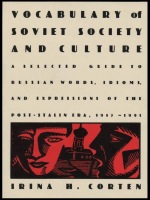 Irina H. Corten's Vocabulary of Soviet Society and Culture is an experiment in what Soviet scholars call lingvostranovedenie—the study of a country and its culture through the peculiarities of its language. Not a conventional dictionary, Corten's lexicon is selective, offering a broad sampling of culturally significant words in the areas of politics, ideology, the economy, education, arts and letters, social problems and everyday life as well as language associated with the personalities and activities of individual Soviet leaders.
The entries are listed alphabetically in English transliteration followed by the Cyrillic, although readers familiar with Russian may prefer to use the Cyrillic alphabet listing included in this volume. In each entry, the author provides a succinct but full explanation of the term and, whenever possible, cross-references to other entries, authentic examples of its use, and samples of relevant Soviet jokes. A reader may approach the lexicon either sequentially or with the aid of a subject thesaurus that divides the material into specific topics. A listing of complementary sources of reference appears in a useful bibliography.
With this fascinating lexicon of "Sovietisms," Corten provides an invaluable and easily accessible medium for those general readers and scholars of the Russian language and Soviet culture interested in understanding contemporary Soviet life.

Selected entries from the Vocabulary of Soviet Society and Culture

Anekdótchik (anekdótchitsa) (cyrillic spelling) (n.)
1: A person who tells jokes (anekdoty); 2: coll. since the late Stalin era, a person arrested and given a prison sentence for the telling of political jokes. The phenomenon indicates the important role of the political joke in Soviet culture and, specifically, in the dissident movement. See iazychnik; sident.

The following jokes were popular during the Brezhnev era:
1. "Comrade Brezhnev, what is your hobby?"
"Collecting jokes about myself."
"And how many have you collected so far?"
"Two and a half labor camps."
2. Question: What is a marked-down joke?
Answer: A joke which, under Stalin, got you ten years in a labor camp, and now gets you only five.

egoístiki (cyrillic) (n.; pl.). Lit., little egotists; coll. since the 1970s referring to headsets worn by music lovers, especially teenage fans of rock music. The idea is that, by wearing headsets, one shuts out the world and becomes indifferent to everything except oneself.

zhrál'nia (cyrillic) (n.). Der. zhrat', to gorge, devour (vulg.); coll. since the 1970s denoting an eating establishment with inexpensive and often bad-tasting food. In the late 1980s, the term also has been applied to new fast-food restaurants which have been built in Soviet cities by Western concerns, for example, McDonald's. See amerikanka; stekliashka; stoiachka.