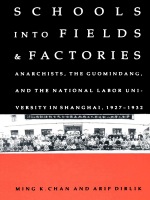 In this collaborative effort by two leading scholars of modern Chinese history, Ming K. Chan and Arif Dirlik investigate how the short-lived National Labor University in Shanghai was both a reflection of the revolutionary concerns of its time and a catalyst for future radical experiments in education. Under the slogan “Turn schools into fields and factories, fields and factories into schools,” the university attempted to bridge the gap between intellectual and manual labor that its founders saw as a central problem of capitalism, and which remains a persistent theme in Chinese revolutionary thinking.
During its five years of existence, Labor University was the most impressive institutional embodiment in twentieth-century China of the labor-learning ideal, which was introduced by anarchists in the first decade of the century and came to be shared by a diverse group of revolutionaries in the 1920s. This detailed study places Labor University within the broad context of anarchist social ideals and educational experiments that inspired it directly, as well as comparable socialist experiments within labor education in Europe that Labor University’s founders used as models. The authors bring to bear the perspectives of institutional and intellectual history on their examination of the structure and operation of the University, presenting new material on its faculty, curriculum, physical plant, and history.
REQUEST ACCESSIBLE FILE