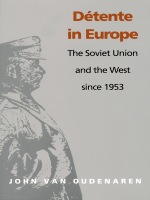 The monumental events in Eastern Europe and the Soviet Union must be understood, Jan Van Oudenaren argues, in the context of a process of East-West détente begun in 1953 in the aftermath of Stalin’s death. Van Oudenaren’s comprehensive and timely study examines the development of Soviet-Western détente from the death of Stalin to the unification of Germany.
In redefining détente as a process, rather than a code of conduct, Van Oudenaren looks to its origins in Soviet policy earlier than previously identified and analyzes both its history and character. His study explores the restoration of four-power negotiations in Germany and Austria in the mid-1950s, their subsequent breakdown in the Berlin crisis, their unexpected revival in 1990 in the form of “two plus four” talks on German unity, and the future of the Soviet Union as a European power.
Among the key elements of détente discussed are diplomacy, particularly the role of summit conferences; cooperation among parliaments, political parties, and trade unions; arms control; economic relations; and links among cultural institutions, churches, and peace movements.
REQUEST ACCESSIBLE FILE