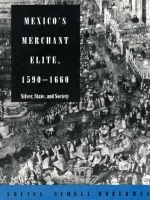 Combining social, political, and economic history, Louisa Schell Hoberman examines a neglected period in Mexico’s colonial past, providing the first book-length study of the period’s merchant elite and its impact on the evolution of Mexico.
Through extensive archival research, Hoberman brings to light new data that illuminate the formation, behavior, and power of the merchant class in New Spain. She documents sources and uses of merchant wealth, tracing the relative importance of mining, agriculture, trade, and public office. By delving into biographical information on prominent families, Hoberman also reveals much about the longevity of the first generation’s social and economic achievements.
The author’s broad analysis situates her study in the overall environment in which the merchants thrived. Among the topics discussed are the mining and operation of the mint, Mexico’s political position vis-a-vis Spain, and the question of an economic depression in the seventeenth century.
REQUEST ACCESSIBLE FILE