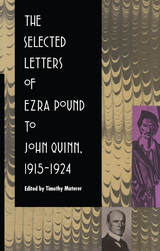 This volume provides a first-hand survey of the arts and literature during a crucial period in modern culture, 1915–1924. Pound was then associated with such germinal magazines as BLAST, The Little Review, The Egoist, and Poetry; he was discovering or publicizing writers such as Robert Frost, Hilda Doolittle, T. S. Eliot, and James Joyce; and he was championing the painters Wyndham Lewis and William Wadsworth as well as the sculptors Jacob Epstein, Henri Gaudier-Brzeska, and Constantin Brancusi.
Pound wrote to John Quinn—a New York lawyer, an expert in business law, and a collector of unusual taste and discrimination—about these artists and many more, urging him to support their journals, collect their manuscripts, and buy and exhibit their paintings and sculptures. Quinn at one time owned manuscripts of Ulysses and The Waste Land, Brancusi’s sculpture Mlle. Pogany, and Picasso’s painting Three Musicians. Yet he was often skeptical about the value of new schools of art, such as Vorticism, and disturbed by the outspokenness of authors such as Joyce. Pound’s letters are unusually tactful when he counters Quinn’s doubts and explains the premises of experimental art. Pound’s letters to Quinn are touched with his characteristic humor and wordplay and are especially notable for their lucidity of expression, engendered by Pound’s deep respect for Quinn.
TABLE OF CONTENTS