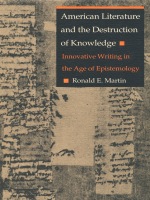 In this challenging work, Ronald E. Martin analyzes the impulse of major nineteenth- and twentieth-century American writers to undermine not only their inherited paradigms of literary and linguistic thought but to question how paradigms themselves are constructed. Through analyses of these writers, as well as contemporaneous scientists, mathematicians, philosophers, and visual artists, American Literature and the Destruction of Knowledge creates a panoramic view of American literature over the past 150 years and shows it to be a crucial part of the great philosophical changes of the period.
The works of Melville, Emerson, Whitman, and Dickinson, followed by Crane, Frost, Pound, Stein, Hemingway, Dos Passos, Aiken, Stevens, and Williams, are examined as part of a cultural current that casts doubt on the possibility of knowledge itself. The destruction of concepts, of literary and linguistic forms, was for these writers a precondition for liberating the imagination to gain more access to the self and the real world. As part of the exploration of this cultural context, literary and philosophical realisms are examined together, allowing a comparison of their somewhat different objectives, as well as their common epistemological predicament.
REQUEST ACCESSIBLE FILE