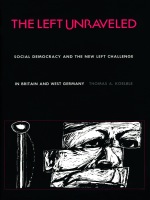 In the early 1980s both the British Labour Party and the West German Social Democrats (SPD), confronted with serious internal challenges from the political left, experienced an erosion of support that resulted in the emergence of new political parties—the British Social Democratic Party and the West German Green Party. Explicitly comparative, this study presents a theoretically innovative analysis while offering a sophisticated understanding of the political confrontations between social democrats, the new left, traditional socialists, and trade unionists in both Britain and West Germany.
By focusing on the established parties rather than on external developments, Koelble departs from conventional methodology regarding the fortunes of political parties. In examining the fundamental processes of decision making and coalition building within the SPD and the Labour Party, he argues that it is the organizational structures within parties that shape political results by setting limits, creating opportunities, and determining strategies.
REQUEST ACCESSIBLE FILE