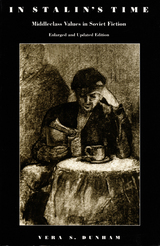 In Stalin's Time: Middleclass Values in Soviet Fiction
by Vera S. Dunham
Duke University Press, 1990
Paper: 978-0-8223-1085-3
This new edition of In Stalin’s Time, which brings back into print Vera Dunham’s 1976 landmark study of popular fiction in the Soviet Union during the Stalin regime, is updated to include new material by the author and a new introduction by Richard Sheldon. Dunham describes how the middle-brow or postwar establishmentarian literature of the Stalinist period was a product of a “Big Deal” intended to propagate values and establish an alliance between the regime and the middle class. Both descriptive and analytical, Dunham’s complex picture of “high totalitarianism” not only reveals insights into the details of Soviet life but illuminates important theoretical questions about the role of literature in the political structure of Soviet society.