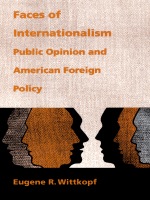 In Faces of Internationalism, Eugene R. Wittkopf examines the changing nature of public attitudes toward American foreign policy in the post-Vietnam era and the role that public opinion plays in the American foreign policymaking process. Drawing on new data—four mass and four elite opinion surveys undertaken by the Chicago Council of Foreign Relations from 1974 to 1986—combined with sophisticated analysis techniques, Wittkopf offers a pathbreaking study that addresses the central question of the relationship of a democracy to its foreign policy.
The breakdown of the “consensus” approach to American foreign policy after the Cold War years has become the subject of much analysis. This study contributes to revisionist scholarship by describing the beliefs and preferences that have emerged in the wake of this breakdown. Wittkopf counters traditional views by demonstrating the persistence of U.S. public opinion defined by two dominant and distinct attitudes in the post-Vietnam war years—cooperative and militant internationalism.
The author explores the nature of these two “faces” of internationalism, focusing on the extent to which elites and masses share similar opinions and the political and sociodemographic correlates of belief systems. Wittkopf also offers an original examination of the relationship between beliefs and preferences.
REQUEST ACCESSIBLE FILE