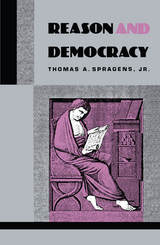 Reason and Democracy breaks new ground in providing a plausible philosophical basis for the communitarian view of a healthy democracy as the rational pursuit of common purposes by free and equal citizens. Thomas A. Spragens Jr. argues that the most persistent paradigms of Western political rationality originated in classical philosophy, took their modern expression in the philosophies of Kant and Mill, and terminated in Max Weber’s pairing of purely technical rationality with arbitrary ends.
Drawing on recent work in the philosophy of science and the philosophy of language, combined with appropriate analogies in political thought and action, Spragens maintains that it is possible to discern the outlines of a philosophically cogent and morally beneficial concept of rational practice on the part of a political community. This possibility, he contends, provides a philosophical basis for liberal democratic politics that is superior to utilitarian and deontological accounts.
REVIEWS
&ldquo;An enormous contribution to the history of Western political thought. . . . Any serious student of democratic theory, of democracy proper for that matter, will have to read and address Spragens&rsquo;s work.&rdquo;&mdash;Robert M. Battistoni