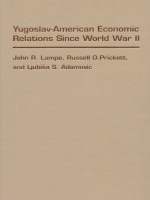 Yugoslav-American Economic Relations Since World War II provides a comprehensive study of the economic relations between the United States and Yugoslavia over the past four decades. The authors recount how Yugoslavia and the United States, despite great differences in size, wealth, and ideology, overcame early misunderstandings and confrontations to create a generally positive economic relationship based on mutual respect. The Yugoslav experience demonstrated, the authors maintain, that existence outside the bloc was possible, profitable, and nonthreatening to the Soviet Union.
The authors describe American official and private support for Yugoslavia’s decades-long efforts at economic reform that included the first foreign investment legislation in 1967 and the first introduction of convertible currency in 1990 for any communist country. Also examined are the origins of Yugoslavia’s international debt crisis of the early 1980s and the American role in the highly complex multibillion-dollar international effort that helped Yugoslavia surmount that crisis.
In the past, U.S. support for the Yugoslav economy was proffered in part, the authors claim, to counter perceived threats from the Soviet Union and its allies. This may have enabled Yugoslavia to avoid some of the hard but necessary economic policy choices; hence, future U.S. support, the book concludes, will likely be tied more closely to the economic and political soundness of Yugoslavia’s own actions.
REQUEST ACCESSIBLE FILE