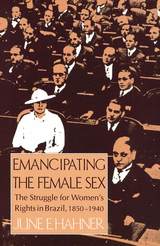 June E. Hahner’s pioneering work, Emancipating the Female Sex, offers the first comprehensive history of the struggle for women’s rights in Brazil. Based on previously undiscovered primary sources and fifteen years of research, Hahner’s study provides long-overdue recognition of the place of women in Latin American history.
Hahner traces the history of Brazilian women’s fight for emancipation from its earliest manifestations in the mid-nineteenth century to the successful conclusion of the suffrage campaign in the 1930s. Drawing on interviews with surviving Brazilian suffragists and contemporary feminists as well as manuscripts and printed documents, Hahner explores the strategies and ideological positions of Brazilian feminists. In focusing on urban upper- and middle-class women, from whose ranks the leadership for change arose, she examines the relationship between feminism and social change in Brazil’s complex and highly stratified society.
REQUEST ACCESSIBLE FILE