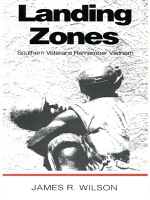 Landing Zones brings to life the dramatic, gripping, and often painful stories of twenty-four Vietnam Veterans from the American South. The men and women interviewed here represent a remarkable range of experience, including a marine rifleman, a helicopter pilot, an army nurse, a prisoner of war, a riverboat gunner, and the commanding general William Westmoreland. Skillfully interviewed by James R. Wilson, a journalist and Army press officer in Vietnam, each narrative explores and describes the war’s events before following the veterans home and carrying them to the present.
These stories focus on a uniquely southern view of Vietnam. In terms of numbers the South shouldered more than its share of human cost—31 percent of Americans who served came from one of the eleven states of the old Confederacy, and 28 percent of the dead were southerners. Southerners also brought to Vietnam certain shared cultural tastes and a particularly southern heritage of honor in military service stemming from the Civil War. For many, as their testimony reveals, a sense of patriotism was tested and questioned by the horrors of war, and for others that patriotism was a continued source of strength.
Individually and collectively, however, these oral histories make up a picture of war that prevents us from forgetting the truth as one veteran put it: “Vietnam was not one war, but a thousand little nasty wars.”
REQUEST ACCESSIBLE FILE