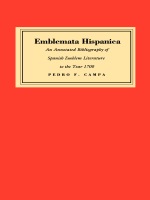 Emblem books—books containing pictorial representations whose symbolic meaning is expressed in words—were produced in great quantities and in numerous languages during the sixteenth and seventeenth centuries. Because literary critics and art historians increasingly recognize the importance of the emblem in Renaissance and Baroque studies, this book answers the need for a bibliography listing the locations of all known emblem books in Spanish, as well as those translated into Spanish, written by Spaniards in other languages, and polyglot editions that contain a Spanish text.
Covered in this bibliography are all emblem books published from the beginning to the end of the Spanish Golden Age, as well as a wide range of secondary sources on relevant subjects, among them mythography, paradoxography, numismatics, fetes, funerals, proverbs, apothegms, antiquarianism, collecting, and pertinent studies in art history and architecture. Providing call numbers for library locations, information on facsimile reprints, and microform editions, the work is extensively indexed—by date and place of publication, by printers and booksellers, by authors and artists, and by dedicatees, as well as by subject.
REQUEST ACCESSIBLE FILE