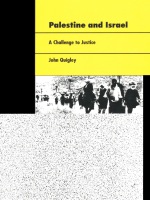 The dispute over Palestine between the Palestinian Arabs and the Israelis is one of the most volatile and intractable conflicts in the world today. Palestine and Israel examines the history of this battle from the perspective of international law, and it argues that a long-term solution to the conflict must protect legitimate interests to remain viable—an element the author believes has so far been seriously neglected. This extensively documented work details the complex politics and agonizing struggles that have characterized the clash between Jews and Arabs, examining in depth the competing claims to Palestine and the extent to which legitimate interests remain to be fulfilled.
Beginning with the early Zionist settlement in Palestine that rose from the effort by Jews to escape long-standing discrimination in Europe, Qigley investigates the origins of the dispute, including the British occupation of Palestine, the British Mandate, and the involvement of the United Nations. He examines the 1948 War, the establishment of Israel, and explores the legal and political status of Jews there. After a detailed analysis of the 1967 War and Israel’s occupation of the West Bank and Gaza Strip, he concludes with recommendations for resolving the conflict, including discussions of the responsibility of other states for the persisting injustice, the role of other states in settling the dispute, and steps to a possible solution.
REQUEST ACCESSIBLE FILE