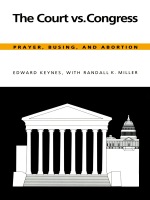 Since the early 1960s the Supreme Court and its congressional critics have been locked in a continuing dispute over the issues of school prayer, busing, and abortion. Although for years the Court’s congressional foes have introduced legislation designed to curb the powers of the federal courts in these areas, they have until now failed to enact such proposals. It is likely that these legislative efforts and the present confrontation with the Court will continue.
Edward Keynes and Randall Miller argue that Congress lacks the constitutional power to legislate away the powers of the federal courts and to prevent individuals from seeking redress for presumed infringements of their constitutional rights in these areas. They demonstrate that neither the framers nor ratifiers of the Constitution intended the Congress to exercise plenary power over the appellate jurisdiction of the Supreme Court. Throughout its history the Court has never conceded unlimited powers to Congress; and until the late 1950s Congress had not attempted to gerrymander the Court’s jurisdiction in response to specific decisions. But the authors contend this is just what the sponsors of recent legislative attacks on the Court intend, and they see such efforts as threatening the Court’s independence and authority as defined in the separation of powers clauses of the Constitution.
REQUEST ACCESSIBLE FILE