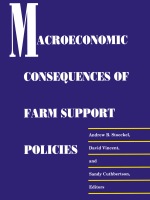 Agricultural protectionism is a basic factor underlying the U.S. trade deficit, Third World debt, and global underemployment. Yet despite the seriousness of the problem and attention given to it by many researchers, little progress has been made in formulating and implementing policies to deal with it.
The scholars and experts here assembled present for the first time a quantification and analysis of the impact upon the world economy of reduction or elimination of agricultural protectionism. They question why, give the magnitude of the problem, inferior policies endure despite the weight of evidence that they have failed. The answer they derive is that there is no general understanding of the true cost of the failure, and therefore it is necessary to initiate reform from outside agricultural circles.
REQUEST ACCESSIBLE FILE