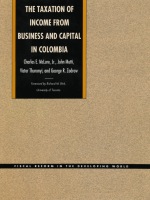 “Over the years Colombian tax officials have received the benefit of first-class advice of leading foreign scholars. In return, these scholars—and indeed everyone concerned with development policy—have gained a great deal both from the unusual willingness of Colombians to consider new ideas in detail and then, after full public discussion, drawing on the work of these experts to design a ‘made-in-Colombia’ solution.
“[The book’s] most important contribution, however, is undoubtedly with respect to consumption taxes. No one, anywhere, has thought through with such care just how the so-called ‘simplified alternative tax’ (essentially a direct personal consumption tax combined with a cash-flow corporate tax) might work in the real world. Since such taxes are increasingly being considered—if not adopted—all over the world, in developing and developed countries alike, for this reason alone this book should be high on the reading list of all those concerned with the design and implementation of efficient and equitable direct tax systems.”—From the Foreword by Richard M. Bird
REQUEST ACCESSIBLE FILE