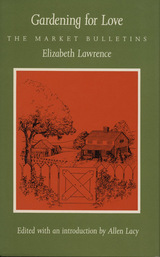 Elizabeth Lawrence occupies a secure place in the pantheon of twentieth-century gardening writers that includes Gertrude Jekyll and Vita Sackville-West of Great Britain and Katherine S. White of the United States. Her books, such as A Southern Garden (1942) and The Little Bulbs (1957), remain in print, continuing to win praise from criticis and to delight an ever-widening circle of readers. In Gardening for Love, Lawrence reveals another world of garden writing, the world of the rural women of the South with whom she corresponded extensively from the late 1950s into the mid-1970s in responce to their advertisements for herbs and ornamental perennials in several market bulletins (published by state departments of agriculture for the benefit of farmers).

It was Eudora Welty who awakened Elizabeth Lawrence's interest in this fascinating topic by putting her name on the mailing list of The Mississippi Market Bulletin, a twice-monthly collection of classified advertisements founded in 1928 and still published today. Lawrence soon discovered market bulletins from the Carolinas and other Southern states, as well as similar bulletins published privately in the North. She began ordering plants from the bulletins, and there ensued a lively exchange of letters wit the women who sold them.

Gardening for Love is Lawrence's exploration of this little-known side of American horticulture and her affectionate tribute to country people who shared her passion for plants. Drawing on the letters she received, sometimes a great many of them from the same persons over many years, she delves into traditional plant lore, herbal remedies, odd and often highly poetic vernacular plant names peculiar to particular regions of the South, and the herb collectors of the mountains of the Carolinas and Georgia. She focuses primarily on the Southeast and the Deep South, but her wide knowledge of both literature and botany gives Gardening for Love a dimension that transcends the category of regional writing.
REVIEWS
-- Katharine White Town & Country

The Other Market Bulletins 117