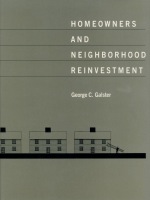 This book investigates the efforts of homeowners to maintain and improve their dwellings. Their behavior, it has found, depends on economic variables as well as the sociological structure of their neighborhoods. Residential satisfaction, expectations of the neighborhood, and mobility plans were taken into account.

Multivariate statistical analyses of models were conducted using household data from Minneapolis and Wooster, Ohio. Three important findings emerged. First, homeowners' sense of solidarity with their neighbors is as significant in determining their efforts at home upkeep as are their income or age. Second, the optimism of homeowners toward increases in property values results in behavior opposite to that produced by optimism about neighborhood quality of life. This implies that different kinds of predictable gaming behavior occur among homeowners, depending on the neighborhoods in which they live. Third, both short-term and extremely long-term plans to move prove damaging to home upkeep.

The results of this study form the basis for a better understanding of such residential phenomena as class succession, racial transition, and gentrification. Galster's findings will also be valuable for analyzing policies that attempt to encourage neighborhood reinvestment.