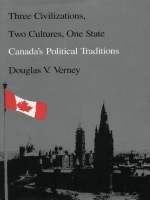 This volume examines 150 years of Canadian political life in light if one of the country's most intractable problems, its cultural identity. Although many thoughtful Canadians remain dubious about the existence of a truly Canadian way of life, Douglas Verney argues that in fact Canada's political traditions embody and reflect a unique culture; and that although the Canadian government has been the primary instrument for nurturing this culture, it has been at the same time the entity most guilty of obscuring and ignoring it.
TABLE OF CONTENTS

1. American in Civilization, Canadian in Culture 9

3. The Americanization of the Social Sciences: The Canadian Response to Scientific Empiricism 58

5. The "Reconciliation" of Parliamentary Supremacy and Federalism 149

6. From Conquest via Rebellion to Dualism: French Canadian Perceptions before 1867 172

8. French Canada and the Triumph of Majority Rule 252

9. Quebec and the Rest of Canada: The Limitations of Philosophical Federalism 300