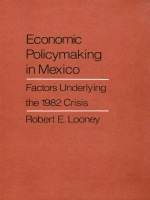 This volume argues that the Mexican crisis of August 1982, in which the country was left facing the prospect of national default and zero economic growth, was not only the result of some fundamental flaws in the country's economy, but is more accurately characterized as a cash flow problem—in the author's words, "a case of illiquidity rather than insolvency." Based on a thorough analysis of the Mexican economy, the book assesses the effectiveness of the various economic programs of the de la Madrid presidency in dealing with the nation's problems.
TABLE OF CONTENTS

I. Historical Trends and Sources of Growth 1

1. An Overview of the Mexican Economy 5

4. Policymaking during the Echeverría Administration, 1971–76 57

5. Policymaking in the Early López Portillo Years: Devaluation and Stabilization 69

7. Fiscal Policy under López Portillo: Prelude to the 1982 Crisis 95

8. Policymaking in López Portillo's Final Year: The 1982 Devaluations and Aftermath 111

11. Macroeconomic Controversies: The Monetarist-Cambridge Interpretations of the Policy Environment 164

12. Impact of Fiscal Policy: A Critique of the Fitzgerald Thesis 179