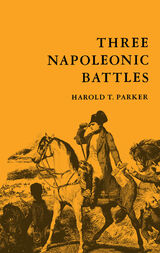 This narrative account of three Napoleonic battles adheres rather closely to the Aristotelian configuration of evolving tragedy. The historian succeeds in presenting herein events and character not only in historical reality but also in unities employed by the artist or tragedian. For a beginning of this lively, military story, Harold T. Parker chooses a portrayal of Napoleon at the height of his power, the battle of Friedland. The middle episode is concerned with Napoleon in his first serious personal check, the battle of Aspern-Essling. To complete the unity and to conclude the tragic progression, the author resurveys the episode of Napoleon's final defeat at the battle of Waterloo.
TABLE OF CONTENTS