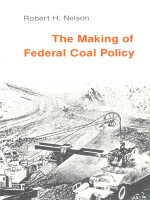 The Making of Federal Coal Policy provides a unique record of—as well as important future perspectives on—one of the most significant ideological conflicts in national policymaking in the last decade. The management of federally owned coal, almost one-third of the U.S.'s total coal resources, has furnished an arena for the contest between energy development and environmental protection, as well as between the federal government and the states. Robert H. Nelson has written an important historical document and a useful guide for policy analysts.
TABLE OF CONTENTS

I. The Conservationist Foundations for Federal Coal Management

1. Conservationism and the Mineral Leasing Act of 1920 13

2. Congressional Intent and Opposite Results 23

II. A Coal Program Based on a Planned Market

4. The Rejection of Central Planning and the Free Market 45

5. A Planned Market Instead of a Free Market 57

6. A New Economic Conservationism to Protect the Environment 70

7. The Judiciary Debates Its Proper Role in Federal Coal Planning 87

IV. Conservationism Put to the Test

11. Central Planning in Operation in the United States 125

13. The Advance and Retreat of Land-Use Planning 152

15. The Rediscovery of the Planned Market 187

VI. A Socialist Experiment in America