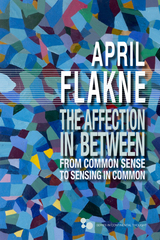 Exposing a fundamental but forgotten capacity to sense with others, this fresh approach to ethics centers on expressive, moving bodies in everyday affective encounters.

Common sense has yet to yield its golden promise: robust selves, a stable sense of reality, and bonds of solidarity. The Affection in Between argues that reimagining common sense involves tackling two intractable philosophical puzzles together: the problems of sensory integration and of “other minds.” Construing common sense as either an individual cognitive capacity or a communal body of beliefs and practices, as our tradition of philosophical and political thought has done for too long, constricts possibilities of self and other, ethics and politics. Neither register alone can evade political manipulation and deliver common ground between confident yet unavoidably porous selves.

April Flakne begins with a novel interpretation of the neglected Aristotelian concept of sunaisthesis, an embodied, interactive capacity to create overlapping meaning through the cultivation of a sensibility that is neither individual nor communal but unfolds between bodies in movement. Bolstering Aristotle’s concept with classical and contemporary phenomenology, including critical phenomenology, empirical theories of social cognition, and affect theory, Flakne offers fresh answers to a pressing and legitimate skepticism about selfhood and the role that ethics might play in countering disorientation and manufactured division. Through an exploration of the intimate experiences of birth, death, caregiving, and mourning, Flakne brings the ethical and political aspects of interembodied interaction home and into lived experience.

April Flakne is a professor of philosophy at New College of Florida. She has published numerous articles and book chapters on Aristotle, phenomenology, political philosophy, and dance theory.

REVIEWS
“April N. Flakne’s book succeeds admirably to explain the complex terrain of intercorporeality in its many dimensions and in the way it grounds common sense in its intimate, social and political possibilities. A pleasure to read. Her style is intimate, but precise, clear without sacrificing complexity…. at times poetic.”—Helen A. Fielding, author of Cultivating Perception through Artworks: Phenomenological Enactments of Ethics, Politics, and Culture

TABLE OF CONTENTS
Cover Page
Series in Continental Thought
Title Page
Copyright Page
Contents
Acknowledgments
Introduction
Part I
Chapter 1. Aristotle and the Birth of the Sunaisthetic Self
Chapter 2. Intercorporeity and the Coming to Be of Common Sense
Chapter 3. Others, Uncommon and Unsightly
Part II
Chapter 4. Morning Shades of Death
Chapter 5. Giving Rise to the Other-in-Common
Concluding Comments: Toward a Virtue of Creating the Common
Notes
Selected Bibliography
Index