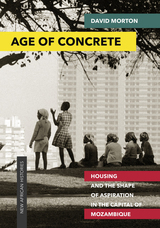 Age of Concrete is a history of the making of houses and homes in the subúrbios of Maputo (Lourenço Marques), Mozambique, from the late 1940s to the present. Often dismissed as undifferentiated, ahistorical “slums,” these neighborhoods are in fact an open-air archive that reveals some of people’s highest aspirations. At first people built in reeds. Then they built in wood and zinc panels. And finally, even when it was illegal, they risked building in concrete block, making permanent homes in a place where their presence was often excruciatingly precarious.

Unlike many histories of the built environment in African cities, Age of Concrete focuses on ordinary homebuilders and dwellers. David Morton thus models a different way of thinking about urban politics during the era of decolonization, when one of the central dramas was the construction of the urban stage itself. It shaped how people related not only to each other but also to the colonial state and later to the independent state as it stumbled into being.

Original, deeply researched, and beautifully composed, this book speaks in innovative ways to scholarship on urban history, colonialism and decolonization, and the postcolonial state. Replete with rare photographs and other materials from private collections, Age of Concrete establishes Morton as one of a handful of scholars breaking new ground on how we understand Africa’s cities.

David Morton is assistant professor of African history at the University of British Columbia. As a journalist prior to his academic career, he wrote for publications such as Architectural Record, the New Republic, and Foreign Policy, and in Mozambique contributed to IRIN, the humanitarian news service.

REVIEWS
“Morton’s argument, delivered with passion and power, gives life to a nuanced, deeply personal understanding of how ordinary residents of disadvantaged urban communities not only make their neighborhoods—they reframe the everyday political order. The stories he tells resonate across the continent.”—Garth Myers, author of African Cities: Alternative Visions of Urban Theory and Practice