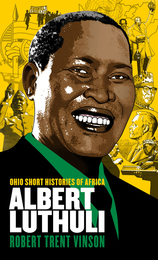 Unlike previous studies, this book places Luthuli and the South African antiapartheid struggle in new global contexts, and aspects of Luthuli’s leadership that were not previously publicly known: Vinson is the first to use new archival evidence, numerous oral interviews, and personal memoirs to reveal that Luthuli privately supported sabotage as an additional strategy to end apartheid. This multifaceted portrait will be indispensable to students of African history and politics and nonviolence movements worldwide.

Robert Trent Vinson is the director and chair of the Carter G. Woodson Institute for African American and African Studies at the University of Virginia and a research associate at Stellenbosch University in South Africa. He is a scholar and teacher of nineteenth- and twentieth-century African and African diaspora history, specializing in the transnational connections between southern Africa, the Americas, and the Caribbean. He is the author of The Americans Are Coming!: Dreams of African American Liberation in Segregationist South Africa and Albert Luthuli: Mandela before Mandela.

REVIEWS
“Vinson provides a good introductory biography of a key figure in South African politics that is ready made for course syllabi. This book is suitable to any class that focuses on Black politics in a global dimension as well as surveys focused on apartheid South Africa.”—Steve Davis, American Historical Review

TABLE OF CONTENTS
Contents
Illustrations
Acknowledgments
Introduction: Who Was Albert Luthuli?
1: The Education of a Zulu Christian
2: Chief of the People
3: The Nonviolent, Multiracial Politics of Defiance
4: Apartheid Violence and Armed Self-Defense
Coda
Notes
Bibliography
Index