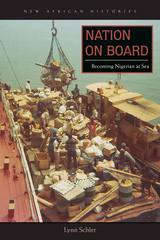 In the 1940s, British shipping companies began the large-scale recruitment of African seamen in Lagos. On colonial ships, Nigerian sailors performed menial tasks for low wages and endured discrimination as cheap labor, while countering hardships by nurturing social connections across the black diaspora. Poor employment conditions stirred these seamen to identify with the nationalist sentiment burgeoning in postwar Nigeria, while their travels broadened and invigorated their cultural identities.

Working for the Nigerian National Shipping Line, they encountered new forms of injustice and exploitation. When mismanagement, a lack of technical expertise, and pillaging by elites led to the NNSL’s collapse in the early 1990s, seamen found themselves without prospects. Their disillusionment became a broader critique of corruption in postcolonial Nigeria.

In Nation on Board: Becoming Nigerian at Sea, Lynn Schler traces the fate of these seamen in the transition from colonialism to independence. In so doing, she renews the case for labor history as a lens for understanding decolonization, and brings a vital transnational perspective to her subject. By placing the working-class experience at the fore, she complicates the dominant view of the decolonization process in Nigeria and elsewhere.

Lynn Schler is a senior lecturer in African history in the Department of Politics and Government, and the director of the Tamar Golan Africa Centre, at Ben-Gurion University of the Negev in Israel.

REVIEWS
”Highly organized and well written, Lynn Schler’s Nation on Board is an important addition to the fields of maritime history, labor history, business history, and the history of decolonization.“—H-Net Reviews


“This is an outstanding piece of social historical research and a significant addition to Nigerian labour and industrial/business history. Schler has made excellent use of a range of archives and interviews and crafted an attractively written book that will be accessible to a range of readers. I take my hat off to her.”—Peter Waterman, advisor, Global Labour Journal


“Schler places the sometimes abstract notion of nationhood into a fresh and dynamic context, and the testimony she presents provides wonderful insights into the textures of life aboard ship and in foreign ports—Douglas Anthony, Franklin and Marshall College

TABLE OF CONTENTS
Contents
Illustrations
Acknowledgments
Introduction
1: The Working Lives of Nigerian Seamen in the Colonial Era
2: Seamen and the Cosmopolitan Imaginary
3: From Citizens of the World to Citizens of Nigeria
4: The Birth of the Nigerian National Shipping Line
5: Nigerianizing the Sea: Cultures of Work on NNSL Ships
6: Seamen in the Shadow of the NNSL Decline and Demise
Conclusion
Notes
Bibliography
Index