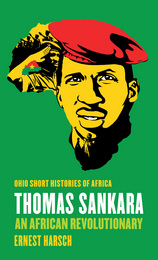 Thomas Sankara, often called the African Che Guevara, was president of Burkina Faso, one of the poorest countries in Africa, until his assassination during the military coup that brought down his government. Although his tenure in office was relatively short, Sankara left an indelible mark on his country’s history and development. An avowed Marxist, he outspokenly asserted his country’s independence from France and other Western powers while at the same time seeking to build a genuine pan-African unity.

Ernest Harsch traces Sankara’s life from his student days to his recruitment into the military, early political awakening, and increasing dismay with his country’s extreme poverty and political corruption. As he rose to higher leadership positions, he used those offices to mobilize people for change and to counter the influence of the old, corrupt elites. Sankara and his colleagues initiated economic and social policies that shifted away from dependence on foreign aid and toward a greater use of the country’s own resources to build schools, health clinics, and public works. Although Sankara’s sweeping vision and practical reforms won him admirers both in Burkina Faso and across Africa, a combination of domestic opposition groups and factions within his own government and the army finally led to his assassination in 1987.

This is the first English-language book to tell the story of Sankara’s life and struggles, drawing on the author’s extensive firsthand research and reporting on Burkina Faso, including interviews with the late leader. Decades after his death, Sankara remains an inspiration to young people throughout Africa for his integrity, idealism, and dedication to independence and self-determination.

Ernest Harsch is a research scholar at the Institute of African Studies at Columbia University. He worked on African issues at the United Nations for more than twenty years and is the author of South Africa: White Rule, Black Revolt.

REVIEWS
“Thomas Sankara: An African Revolutionary will serve as an excellent introduction to Sankara and the revolution in Burkina Faso and explain why Sankara continues to be so widely admired throughout Africa and beyond.”—Christopher Wise, author of Derrida, Africa, and the Middle East


“…[A] fascinating read about a leader who not only led a revolution to free his people … but also lived a simple and humble life, uncorrupted by the power of the office he held.”—Africa Renewal


“Harsch’s book helps us understand why [Sankara's] ideas are still very much alive. It's a good read and well worth the price.”—The Bullet

TABLE OF CONTENTS
Contents
List of Illustrations
Preface
1: “Another Way of Governing”
2: The Forging of a Rebel
3: Onto the Political Stage
4: The State Reimagined
5: Mobilizing the Nation
6: Development for the People
7: A Foreign Policy of One’s Own
8: The Last Battles
9: “Is It Possible to Forget You?”
Selected Bibliography
Index