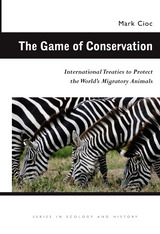 The Game of Conservation is a brilliantly crafted and highly readable examination of nature protection around the world.

Twentieth-century nature conservation treaties often originated as attempts to regulate the pace of killing rather than as attempts to protect animal habitat. Some were prompted by major breakthroughs in firearm techniques, such as the invention of the elephant gun and grenade harpoons, but agricultural development was at least as important as hunting regulations in determining the fate of migratory species. The treaties had many defects, yet they also served the goal of conservation to good effect, often saving key species from complete extermination and sometimes keeping the population numbers at viable levels. It is because of these treaties that Africa is dotted with large national parks, that North America has an extensive network of bird refuges, and that there are any whales left in the oceans. All of these treaties are still in effect today, and all continue to influence nature-protection efforts around the globe.

Drawing on a wide variety of primary and secondary sources, Mark Cioc shows that a handful of treaties—all designed to protect the world’s most commercially important migratory species—have largely shaped the contours of global nature conservation over the past century. The scope of the book ranges from the African savannahs and the skies of North America to the frigid waters of the Antarctic.

Mark Cioc is a professor of history at the University of California, Santa Cruz and the author of The Rhine: An Eco-Biography, 1815–2000. He is a coeditor of How Green Were the Nazis? Nature, Environment, and Nation in the Third Reich.

REVIEWS
“The book’s expository prose style is in tune with its overall design: clarity and utility are foremost.… The Game of Conservation will be a valuable resource for any scholar of conservation, colonialism or international treaty making.”—Environment and History


“The Game of Conservation is a concise, well-researched, and nicely presented study of pioneering wildlife protection treaties from the first half of the twentieth century.… This study offers a valuable model for environmental historians seeking to provide accessible and insightful scholarship that transcends national boundaries.”—Environmental History


“An impressive and fresh approach to studying the environment in the twenty–first century.”—Michael Lewis, Salisbury University