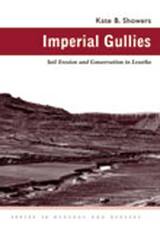 Once the grain basket for South Africa, much of Lesotho has become a scarred and degraded landscape. The nation’s spectacular erosion and gullying have concerned environmentalists and conservationists for more than half a century. In Imperial Gullies: Soil Erosion and Conservation in Lesotho, Kate B. Showers documents the truth behind this devastation.

Showers reconstructs the history of the landscape, beginning with a history of the soil. She concludes that Lesotho’s distinctive erosion chasms, called dongas—often cited as an example of destructive land-use practices by African farmers—actually were caused by colonial and postcolonial interventions. The residents of Lesotho emerge as victims of a failed technology. Their efforts to mitigate or resist implementation of destructive soil conservation engineering works were thwarted, and they were blamed for the consequences of policies promoted by international soil conservationists since the 1930s.

Imperial Gullies calls for an observational, experimental, and, most important, a fully consultative and participatory approach to address Lesotho’s serious contemporary problems of soil erosion. The first book to bring to center stage the historical practice of colonial soil science—and a cautionary tale of western science in unfamiliar terrain—it will interest a broad, interdisciplinary audience in African and environmental studies, social sciences, and history.

Kate B. Showers is a visiting research fellow and senior research associate at the Centre for World Environmental History, University of Sussex, England. She has lived in rural Lesotho and served as head of research, Institute of Southern African Studies, National University of Lesotho.

REVIEWS
“Undoubtedly one of the most important books written to date on any part of the environmental history of Africa. It stands out in the discipline of environmental history in general as an unusually sophisticated work of great insight and explanatory power.”—Richard H. Grove, author of Green Imperialism: Colonial Expansion, Tropical Island Edens, and the Origins of Environmentalism, 1600–1860