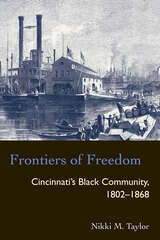 Nineteenth-century Cincinnati was northern in its geography, southern in its economy and politics, and western in its commercial aspirations. While those identities presented a crossroad of opportunity for native whites and immigrants, African Americans endured economic repression and a denial of civil rights, compounded by extreme and frequent mob violence. No other northern city rivaled Cincinnati’s vicious mob spirit.

Frontiers of Freedom follows the black community as it moved from alienation and vulnerability in the 1820s toward collective consciousness and, eventually, political self-respect and self-determination. As author Nikki M. Taylor points out, this was a community that at times supported all-black communities, armed self-defense, and separate, but independent, black schools. Black Cincinnati’s strategies to gain equality and citizenship were as dynamic as they were effective. When the black community united in armed defense of its homes and property during an 1841 mob attack, it demonstrated that it was no longer willing to be exiled from the city as it had been in 1829.

Frontiers of Freedom chronicles alternating moments of triumph and tribulation, of pride and pain; but more than anything, it chronicles the resilience of the black community in a particularly difficult urban context at a defining moment in American history.

Nikki M. Taylor is a professor of African American history at Howard University. Her other books include Frontiers of Freedom: Cincinnati’s Black Community, 1802–1868 and America’s First Black Socialist: The Radical Life of Peter H. Clark.

REVIEWS
“This meticulously researched and lucidly written volume is a must read for anyone interested in the history of Cincinnati and the surrounding region.”—Northern Kentucky Heritage


“Taylor has a good eye for social history and has effectively teased an important and compelling story out of a wide variety of sources. Among Taylor’s major interpretive innovations are ones that implicitly challenge the privileged place of the black church and the black elite in antebellum African American community studies.”—Roy E. Finkenbine, coeditor of Black Abolitionist Papers, 1830-1865