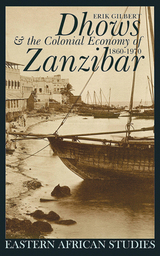 Conventional history assumes that the rise of the steamship trade killed off the Indian Ocean dhow trade in the twentieth century. Erik Gilbert argues that the dhow economy played a major role in shaping the economic and social life of colonial Zanzibar. Dhows, and the regional trade they fostered, allowed a class of indigenous entrepreneurs to thrive in Zanzibar. These entrepreneurs, whose economic interests stretched across continents and colonial boundaries, were able to thwart or shape many of the colonial state’s pet projects. Not only did steamships fail to drive out indigenous sailing craft, but in some cases dhows were able to drive the steamer out of specific market niches. In highlighting the role of East Africa’s commercial connections to the Middle East and India during the colonial period, Dhows and the Colonial Economy of Zanzibar, 1860-1970 makes a major contribution to African history as part of world history.

Erik Gilbert is an assistant professor of history at Arkansas State University.

REVIEWS
“Essential reading for anyone interested in Indian Ocean trade or the limits of ‘modernization’ during the colonial era.”—Laura Fair, The International History Review


“Well-written, succinct…Clearly this volume is an excellent resource for scholars as well as a useful, thought-provoking text for any graduate or undergraduate seminar.”—Catherine Cymone Fourshey, Itinerario


“Dhows and the Colonial Economy of Zanzibar provides the most thorough discussion to date of the centrality of the dhow to Zanzibar’s economic history. Generously illustrated and concisely written…provides a very readable accoun