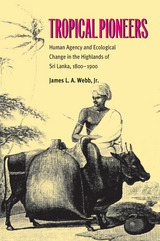 In 1800, the highlands of Sri Lanka had some of the most biologically diverse primary tropical rainforest ecosystems in the world. By 1900, only a few craggy corners and mountain caps had been spared the fire stick. Highland villagers, through the extension of slash-and-burn agriculture, and British managers, through the creation of plantations—first of coffee, then cinchona, and finally tea—had removed virtually the entire primary forest cover.

Tropical Pioneers documents the conversion of a tropical rainforest biome and the collision between what previously had been more discrete ecological zones within South Asia. The ecological impacts were transformational. Author James L. A. Webb, Jr., demonstrates that profound ecological disruption occurred in the central highlands of Sri Lanka during the nineteenth century and suggests that the theme of ecological crisis brought about by the integration of tropical ecological zones during precolonial and colonial periods alike is an important one for historians to investigate elsewhere.

Tropical Pioneers is based on extensive research in the National Archives of Sri Lanka, the National Agricultural Library at Gannaruwa, the Library of the Royal Asiatic Society-Ceylon Branch, the Royal Botanic Gardens at Kew, the Public Record Office of the United Kingdom, and the British Library.

James L. A. Webb, Jr. is a Professor of History at Colby College. He is the editor of the Ohio University Press series Perspectives on Global Health and the Series in Ecology and History and the author of Humanity’s Burden: A Global History of Malaria and The Long Struggle against Malaria in Tropical Africa. He is currently writing a book on the historical epidemiology of diarrheal diseases.