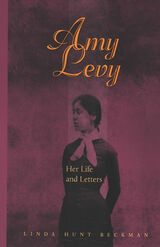 After a century of critical neglect, poet and writer Amy Levy is gaining recognition as a literary figure of stature.

This definitive biography accompanied by her letters, along with the recent publication of her selected writings, provides a critical appreciation of Levy’s importance in her own time and in ours.

As an educated Jewish woman with homoerotic desires, Levy felt the strain of combating the structures of British society in the 1880s, the decade in which she built her career and moved in London’s literary and bohemian circles. Unwilling to cut herself off from her Jewish background, she had the additional burden of attempting to bridge the gap between communities.

In Amy Levy: Her Life and Letters Linda Hunt Beckman examines Levy’s writings and other cultural documents for insight into her emotional and intellectual life. This groundbreaking study introduces us to a woman well deserving of a place in literary and cultural history.

Linda Hunt Beckman is Professor of English at Ohio University and the author of A Woman’s Portion: Ideology, Culture, and the Female Novel Tradition as well as numerous articles and essays.

REVIEWS
“This is a seminal study, offering sensitive and informed interpretation of a ‘witty, troubled, gifted, ironic, and singular young woman negotiating the troubled waters of her time.’ Beckman’s volume is recommended for upper-division undergraduates through professionals and for general readers.”—Choice