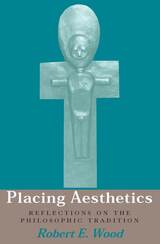 Examining select high points in the speculative tradition from Plato and Aristotle through the Middle Ages and German tradition to Dewey and Heidegger, Placing Aesthetics seeks to locate the aesthetic concern within the larger framework of each thinker’s philosophy.

In Professor Robert Wood’s study, aesthetics is not peripheral but rather central to the speculative tradition and to human existence as such. In Dewey’s terms, aesthetics is “experience in its integrity.” Its personal ground is in “the heart,” which is the dispositional ground formed by genetic, cultural , and personal historical factors by which we are spontaneously moved and, in turn, are inclined to move, both practically and theoretically, in certain directions.

Prepared for use by the student as well as the philosopher, Placing Aesthetics aims to recover the fullness of humanness within a sense of the fullness of encompassing Being. It attempts to overcome the splitting of thought, even in philosophy, into exclusive specializations and the fracturing of life itself into theoretical, practical, and emotive dimensions.

Robert E. Wood, chair and professor of philosophy at the University of Dallas, is editor of American Catholic Philosophical Quarterly and author of Martin Buber's Ontology and A Path into Metaphysics.