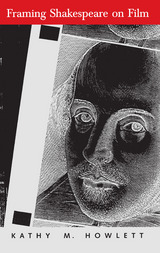 The aesthetics of frame theory form the basis of Framing Shakespeare on Film. This groundbreaking work expands on the discussion of film constructivists in its claim that the spectacle of Shakespeare on film is a problem-solving activity.

Kathy Howlett demonstrates convincingly how viewers’ expectations for understanding Shakespeare on film can be manipulated by the director’s cinematic technique. Emphasizing that the successful film can transform Shakespeare’s text while remaining rooted in Shakespearean conceptions, Howlett raises the question of how directors and audiences understand the genre of Shakespeare on film and reveals how the medium alters the patterns through which the audience views Shakespeare.

Kathy M. Howlett has taught Shakespeare at Northeastern University and is the author of articles on Shakespeare, film, and Aphra Behn.