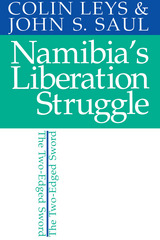 It took twenty-three years of armed struggle before Namibia could gain its independence from South Africa in March 1990. Swapo’s victory was remarkable in the face of an overwhelmingly superior enemy. How this came about, and at what cost, is the subject of this outstanding study that is based on unpublished documents and extensive interviews with a large range of the key activists in the struggle.

The story that emerges is one of endurance and heroism in face of atrocious brutality on the part of the colonialists. But it reveals that it was also one of painful compromises imposed by the conditions of the struggle and the subordination of internal democracy within the liberation movement to the single goal of military and diplomatic victory.

The study will be of keen interest to everyone concerned with southern Africa. Students of armed liberation struggle generally will find much to challenge received wisdom. The sheer human interest of the interviews makes the book attractive to a wide readership.

Colin Leys and John S. Saul, who led the research team, have been working on development in eastern, central, and southern Africa for over thirty years. Their books are numerous and have been deeply influential.