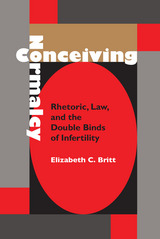 Elizabeth C. Britt uses a Massachusetts statute requiring insurance coverage for infertility as a lens through which the work of rhetoric in complex cultural processes can be better understood. Countering the commonsensical notion that mandatory insurance coverage functions primarily to relieve the problem of infertility, Britt argues instead that the coverage serves to expose its contours.

Britt finds that the mandate, operating as a technology of normalization, helps to identify the abnormal (the infertile) and to create procedures by which the abnormal can be subjected to reform. In its role in normalizing processes, the mandate is more successful when it sustains, rather than resolves, the distinction between the normal and the abnormal. This distinction is achieved in part by the rhetorical mechanism of the double bind. For the middle-class white women who are primarily served by the mandate, these double binds are created both by the desire for success, control, and order and by adherence to medical models that often frustrate these same desires. The resulting double binds help to create and sustain the tension between fertility and infertility, order and discontinuity, control and chaos, success and failure, tensions that are essential for the process of normalization to continue.

Britt uses extensive interviews with women undergoing fertility treatments to provide the foundation for her detailed analysis. While her study focuses on the example of infertility, it is also more broadly a commentary on the power of definition to frame experience, on the burdens and responsibilities of belonging to social collectives, and on the ability of rhetorical criticism to interrogate cultural formations.

Elizabeth C. Britt is Assistant Professor in the Department of English at Northeastern University.

REVIEWS
“There is a rapidly growing literature on topics related to family building in traditional and nontraditional ways. This is the first I am aware of that undertakes a rhetorical analysis of the discourse surrounding infertility and its resolution.”
—Lisa Cuklanz, Boston University— -